The goal of this project was to create a mixed reality prototype that can help an engineer prepare for and then perform a valve adjustment on an Energy Solutions diesel engine.

Based on the materials we received and our understanding of the work process we designed and built the prototype. The core of the prototype is to support an engineer in preparing for and performing a valve adjustment on a diesel engine and make the current printed work description obsolete. In addition, the prototype should help the engineer perform the task faster, with fewer mistakes and higher safety.

In order to allow the engineer to have his/hers hands free to perform the task, the prototype supports interaction through voice commands. And if the noise in the engine room interferes with the voice commands, then the application also supports navigation via hand gestures. 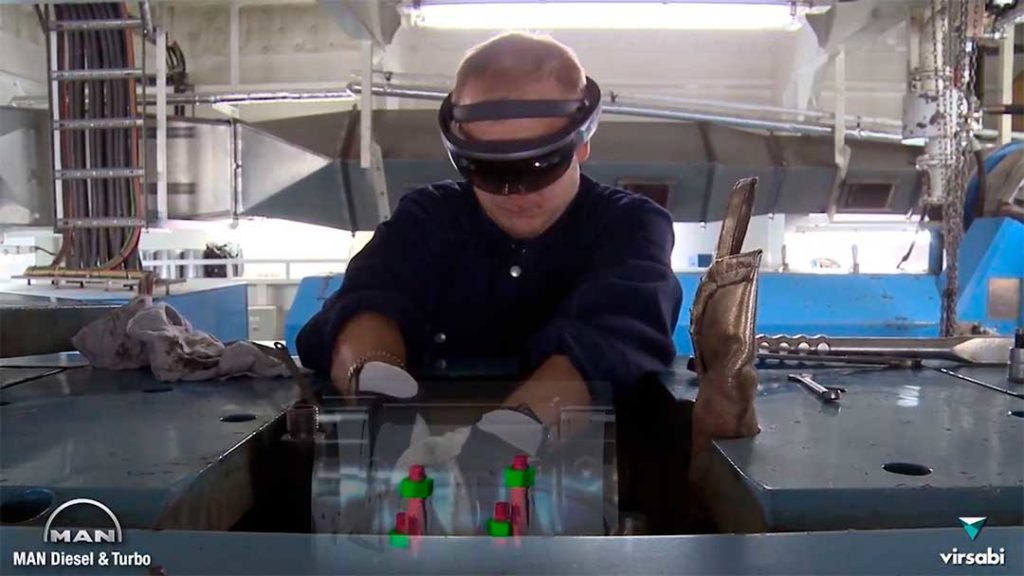 The prototype was tested both in the control room and in the engine room on different ships, during an actual valve adjustment process. To make the voice recognition work, we connected the HoloLens to a 4G mobile hotspot.

The Valve Adjustment task was performed on an auxiliary engine in a room separate from the main engine. The base noise level was medium with occasional alarms and some other sound interference happening during the test.

Despite the harsh environment the HoloLens and the app itself worked well. The engineer was able to review the preparation instructions, perform the positioning of the 3D model and control the step-by-step instructions through both voice and hand gestures. The general consensus was that the application UI was logical and easy to use.

A couple of challenges in the tests was the dark tint on the lenses, which made it somewhat challenging to see the work area as there isn’t much light in the room. Another is that the physical space where the work takes place, is very confined which might make it necessary for the user to lean back over a rail, or some other obstacle, in order to place the 3D model in line with the physical component.

The value lies in these 3 key areas

The first is the shorter amount of time it takes to prepare for a task because you already have all the relevant data with you in the HoloLens. And therefore you are both faster and better prepared to do the job.

The second is about both the faster performance and the improved safety the prototype gives the user. Because you constantly have to have your focus on the components you are working with to avoid mistakes and injuries. So Instead of looking at a piece of paper to the side, the HoloLens gives the user both the real world image and the guidelines for the job at the same time, while keeping the user’s hands free to do the job.

The third area and one of the points the crew kept bringing up was the potential of saving time. The prototype saves a lot of time through the automatic registration of parts used in the job and of the completion of the job – rather than having to manually register everytime you use a part or finish a job. It also removes the risk of forgetting to do so.

Does this sound like an idea you could use?

Virsabi is a virtual reality studio.A technology house of developers and creatives, and one of the first Virtual Reality dedicated companies, offering business consultancy, advisory work and technical development for the utilization of Virtual Reality, Augmented Reality and Mixed Reality.